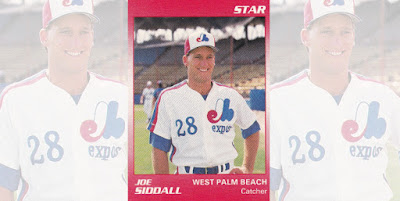 Going into his seventh pro season in 1994, Joe Siddall had done a lot and his manager that spring, Felipe Alou, knew it, Siddall's hometown Windsor Star wrote.

Alou, in his third season managing Montreal, had managed Siddall four seasons prior at high-A West Palm Beach - and for Siddall's first 19 major league games in 1993, The Star wrote.

"He's been used in every way: he's been my No. 1 catcher, then forgotten about, used to develop pitchers and used to develop another catcher (Tim Laker)," Alou told The Star late that spring. "You do that, you learn a lot."

Siddall took what he learned to time in three more major league seasons, though not in that 1994 campaign. By the time he was done, Siddall had seen time in 12 professional campaigns and gotten into 73 total big league games.

Siddall then took everything he learned to another career in the game, as a broadcaster for the Blue Jays.

His post-playing time also saw tragedy, the loss of his son to cancer.

Siddall's career began in 1988, signed by the Expos as an undrafted free agent out of Central Michigan University and Assumption High in Windsor, Ont.

"I was fairly happy with the way things went," Siddall told The Star that September of his Rockford campaign. "I worked a lot on my defense and it improved a lot. But there's always room for improvement as a catcher."

Siddall got into 19 games for the Expos that year. He picked up two hits in 20 at bats. He then played 1994 back at Ottawa.

His final major league time came in 1998, with the Tigers. He saw 29 games and hit .185. He then ended his career with two more AAA campaigns, his last with the Red Sox at Pawtucket in 2000.

Siddall initially stayed in the game as a batting practice pitcher for the Tigers. He spent 12 seasons doing that while raising his family in Windsor.

Then, in early 2014, blood cancer claimed his son Kevin at the age of 14. In the wake of the tragedy, Blue Jays radio voice Jerry Howarth reached out to offer his sympathies, The Star wrote. Their conversation led to an offer to try out for a Blue Jays radio job, which he then won.

"I think everything happens for a reason," Siddall told The Star that spring. "Maybe Kevin is sending me a message here to go chase another dream."

Siddall spent four seasons in the radio booth before moving to television as an analyst, a job he is set to continue in 2021. 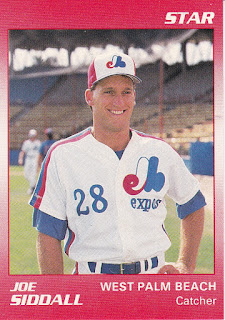