Jerry Schunk used his drive to propel him to 10 pro seasons; Made AAA, not bigs 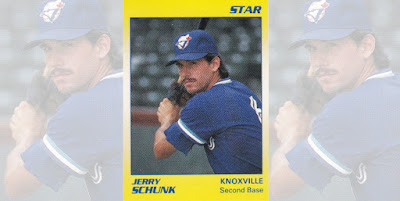 Originally published March 30, 2013
There was talk that September in 1991 that Jerry Schunk might get his first call to the bigs, according to The Toledo Blade.

His manager at AAA Syracuse Bob Bailor just wanted him to continue doing what he'd been doing.

"He's going to have to keep convincing people he's legitimate," Bailor told The Blade. "If it wasn't for his drive, he wouldn't have made it this far - he would have been pushed out of the way a long time ago."

While Schunk's drive got him that far, to AAA, the talk of a call-up never materialized into reality. In a career that spanned 10 seasons, Shunk's drive wouldn't get him any farther.

Schunk's pro career began in 1986, taken by the Blue Jays in the sixth round of the draft, out of the University of Toledo.

With Toledo, Schunk won second-team All-Mid-American Conference honors that year, hitting .333, according to The Blade.

Schunk made it to AA Knoxville for 1989, hitting .241. He returned to Knoxville for 1990, also getting 26 games at AAA Syracuse that year. In April, with Knoxville, Schunk won accolades for his glove, leaping to catch a ball at the wall with the bases loaded in Orlando.

For 1991, Schunk returned to Syracuse. Then came the talk of the September call-up, the one that didn't materialize. He hit .248 with Syracuse that year and .261 with Syracuse the next year.

For 1993, Schunk moved to the Twins system, playing at AAA Portland. He then moved to the Marlins for 1994, stepping back to play at AA Portland in the Eastern League. With AA Portland in May 1994, Schunk hit the game-winning double, receiving praise from his manager Carlos Tosca.

"We certainly didn't bang the ball around a lot today, but that was a timely hit by Schunk," Tosca told The Lewiston Sun-Journal.

Schunk's final year as a pro, his 10th overall, came in 1995, with the Marlins at AAA Charlotte, his career ending without seeing the majors. 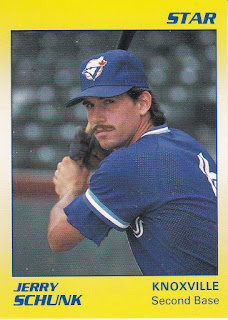