But the hurler who'd been released two years earlier after a strained shoulder and then returned to the field with a tryout gained through connections to the co-op team soon got on track and became one of the league's most reliable, The Gazette-Journal wrote.

"He's gotten better every time out," Reno manager Eli Grba told The Gazette-Journal of Whitney that August. "He knows how to pitch. He straightened out his back and learned a few more grips."

Whitney's career began in 1987, signed by the Athletics as an undrafted free agent out of Arizona State University.

Whitney signed after a tryout camp. Assigned to single-A Modesto, Whitney allowed one run over his first two outings, 5.2 innings of work. Overall, he saw 22 games, six starts. He went 4-5, with a 3.72 ERA and picked up three saves.

Released by the Athletics, he sat out 1988 and then caught back on with Reno in 1989. In one stretch that June, he threw three-consecutive complete games and gave up just two earned. He ended the season 9-7 over 28 outings, 17 starts. He also threw nine total complete games.

He returned to Reno for 1990, after one of the club's original pitchers got reassigned. On his return, he went 4-3, with a 4.54 ERA over 17 outings, seven starts. He threw two complete games. That season proved his last as a pro.

In February 1992, he was back in Reno, offering youth pitching lessons. 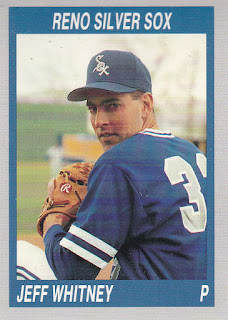