Greg Paxton picked up his first win on the 1990 season in this April game. He did so by going six innings and giving up two runs on six hits, The Reno Gazette-Journal wrote.

He explained to The Gazette-Journal how he did it, giving credit to his fielders.

"I was just throwing strikes and letting the defense do the job," Paxton told The Gazette-Journal. "My curveball was on and that was the key."

Paxton picked up that win in his second season as a pro. It also proved his last. Slowed by injury, he played just those two campaigns. He made high-A.

Paxton's career began in 1989, signed by the Indians as an undrafted free agent out of Cal Poly-San Luis Obispo.

He started with the Indians in the rookie Gulf Coast League. He saw eight starts and went 1-1, with a 3.71 ERA.

Paxton then moved to high-A Reno for 1990. The Gazette-Journal noted to start that year that Paxton's best pitch was his curveball.

He pitched that April, but went down May 1 with torn ligaments in his throwing elbow. He underwent surgery and returned in mid-July, The Gazette-Journal wrote. He expressed optimism upon his return.

"I threw well in simulated games last week," Paxton told The Gazette-Journal before the game. "Hopefully, it will carry over into the real game."

His return went poorly as he gave up nine earned in just over an inning. Overall, he went 2-3, with a 7.56 ERA over six starts to end his career.

Paxton has since become a youth coach in his native California. He's listed in 2020 as a travel team coach and instructor with Sirious Baseball in Campbell. 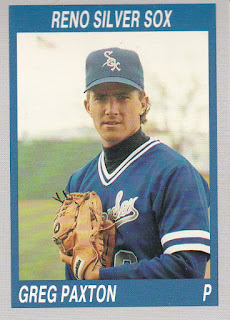