Felipe Alou enjoyed himself over 17 major league seasons as a player, 14 as a manager

After spending 17 seasons in the majors as a player, Felipe Alou signed on with the Expos in 1977 to manage, at single-A West Palm Beach.

To The Miami News that June, Alou explained the transition from the majors to the low minors.

"There's a lot to do," Alou told The News. "I handle more balls in one day now than I used to in a year. But I like it. I'm really enjoying myself."

Alou enjoyed his work enough to first return to the majors as a coach, then as a manager. He ultimately spent a decade as manager of the big league Expos in Montreal, then four more helming the Giants in San Francisco.

Along the way, he headed up the 1994 Expos team that amassed baseball's best record before the strike and earned the National League's top manager award for his efforts.

Alou's career in baseball began in 1956, signed by the Giants out of his native Dominican Republic.

He played his first year largely at Class D Cocoa, then saw single-A Springfield and AAA Minneapolis in 1957.

Alou started 1966 at age 31 with hits in 16-straight games. He told The Associated Press that May he thought he might slow down due to his age.

Alou then played in five more seasons after his Braves time. He last saw three games with the Brewers in 1974. In his 17 seasons, he saw more than 2,000 games played and hit .286.

He then started his coaching and managerial career by 1977, at West Palm Beach. He quickly saw Montreal in 1979 and 1980 as an assistant coach. He also served as a first base coach in Montreal in 1984.

"This is very gratifying," Alou told The AP after winning the award. "But I would trade this for a playoff spot. The one regret I have is that we didn't complete the regular season."

In 2018, he published his autobiography, "Alou: My Baseball Journey."

"It's about my journey of life," Alou told The Tampa Bay Times upon the book's release. "Baseball is part of my everything."

Alou continues with the Giants in 2020 as special assistant to baseball operations. 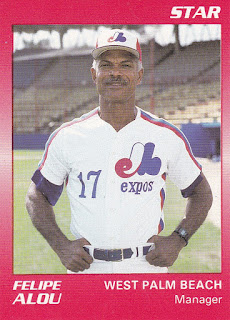