Afterward, Odekirk went up to Treanor and expressed his appreciation, The Gazette-Journal wrote.

"Thank you," Odekirk told Treanor, according to The Gazette-Journal. "You made me do things out there that I've never done in my career." To which Treanor responded, "You did those things. I didn't."

A few years earlier, Treanor had done some things he'd never done, namely, take a job as a coach in minor league baseball. To do so, he left a job he'd held for 13 years, one as a police officer and undercover detective.

In baseball, Treanor would continue to do things he hadn't done, while supporting young players in the process. In 2017, he made the majors as bullpen coach for the Miami Marlins.

Treanor's time in baseball began early on, by the early 1970s at Cal Poly San Luis Obispo, on the college's baseball team. In 1970, the pitcher Treanor threw a 2-0 no-hitter.

While the pros didn't come calling, the San Luis Obispo Police Department did. By 1975, the pitcher had turned officer.

He went on to serve 13 years as an officer and undercover narcotics detective. By 1979, he'd made detective and helped investigate a bank robbery. That December, he worked undercover and led to the arrest of a man on charges of selling 10 pounds of "Thai marijuana sticks," according to The Arroyo Grande Times-Press-Recorder.

Then, by 1988, Treanor had finally arrived in the pros, as a minor league manager and coach, serving that year as manager of the single-A Fresno Suns.

The move came as a result of a call from former major league pitcher Mike Krukow, who'd also played for Cal Poly San Luis Obispo and knew Treanor from when Treanor returned to help out, The San Luis Obispo Tribune wrote years later.

"You don't make a lot of money in the minor leagues," Krukow told The Tribune then. "He walked away from that (police work) because of his passion for baseball."

Despite his police work, Treanor never really left the game.

In 1977, he reestablished a semi-pro team in San Luis Obispo. The next year, he dismissed promotions to increase attendance, telling The Lompoc Record he felt it distracted from the game. Instead, he made up the extra expenses out of his own pocket.

By 1984, he was coaching in college, at Cuesta College. He spent three seasons there, then arrived in the pros.

After Fresno, he moved to the Indians and the Gulf Coast League for 1989. He started 1990 as a coach at high-A Reno and returned there as pitching coach in 1991.

He coached at AA Memphis in 1995 and at AAA Ottawa in 1998. His first high-level managerial job came in 2002 at Calgary. He then spent five seasons managing at AAA Albuquerque and then seven as manager at AAA Indianapolis.

In 2017, the former police officer made the move up to the majors, as bullpen coach with the Marlins. He stayed for three seasons.

After his first game, in Washington, Treanor spoke to The South Florida Sun Sentinel about his arrival.

"An emotional day," Treanor told The Sun Sentinel then. "I thought about a lot of things — about the journey, [being in] the nation's capital, the ceremony, the flyover … and all the people I have to thank." 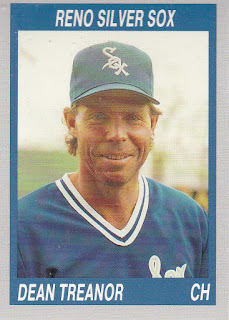