Partway through his 16th season in the pros, Clyde "Pork Chop" Pough spoke to ESPN in 2003 for a feature on independent ball.

He'd had plenty of experience there. That 2003 season marked his fifth with the independent Nashua Pride.

"You learn to motivate yourself," Pough told ESPN. "You never know who might be watching."

Plenty of people watched Pough over his pro career. Over a decade in affiliated ball, he made AAA over five seasons, but he never made the bigs.

But fans also watched Pough for another reason, his unusual nickname, counted by some as among the more unusual in the colorful history of baseball nicknames.

His nickname also had connections to another, Tom "Flash" Gordon.

Pough's pro career began in in 1988, taken by the Indians in the third round of the draft out of Avon Park High School in Florida.

At Avon Park, scouts clocked his fastball between 85 and 88 mph and had a 0.40 ERA his senior year, The Tampa Tribune wrote in May 1988. The Tribune spelled Pough's nickname "Poke Chop" and Pough credited the nickname to his uncle, Tom Gordon Sr.

(Tom Gordon, the future major leaguer, was Pough's cousin and, from sixth grade on, Pough lived with he Gordons)

"When I was younger, everybody called me 'Pokey,'," Pough told The Tribune then. "But then my uncle Tom (Gordon Sr.) started calling me 'Pokechop'. I don't know why. Somehow it stuck."

With the Indians, Pough started in the rookie Gulf Coast League and played the field. He hit .260 in 52 games on the year.

Pough first made it above high-A for extended time in 1994, when he played the year at AA Canton-Akron and saw brief time at AAA Charlotte. He hit .298 over 105 games, with 20 home runs at Canton-Akron.

His play on the field that year drew praise from his Canton-Akron manager Ted Kubiak, according to The Tribune.

"Chop has had a good year and I think kind of surprisingly so within the organization," Kubiak told The Tribune. "They were looking for him to do something this year and he's really been the most consistent hitter on this team, really taken to this league."

Pough played three more seasons in affiliated ball. He moved to the Red Sox system for 1995 and most of 1996. He played 1997 at AAA Omaha with the Royals.

In 2011, Pough was back in Florida working with Gordon on a youth team they formed, Florida Flash. 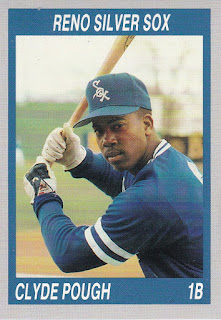