Originally published March 24, 2013
Florence Blue Jay pitcher Chris Jones had some good company on the mound that day in Charleston, S.C. in 1986. But that company wasn't his opponent in the game - it was the guy who took the mound before him.

Jones ended up playing in two more seasons. He started 1991 back at Knoxville, before moving mid-season to the Dodger system and AAA Albuquerque. He played his final games in 1992, with the Cardinals at AAA Louisville, ending his career. 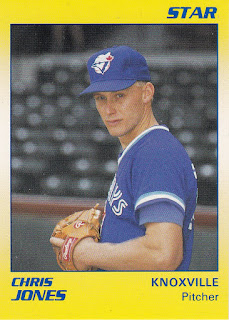