He described the victory to The Tribune afterward.

"It felt great ... best I've ever felt on the mound," Pettiford told The Tribune.

Pettiford experienced that win in his fifth season as a pro. He went on to see time in two more campaigns. He topped out at AA.

Pettiford's career began in 1988, taken by the Indians in the 36th round of the draft out of Jackson State University in Mississippi.

He moved to high-A Reno for 1990. He pitched well enough in the season's first half to make the league All-Star team. He also threw three innings in the game, gave up one run and picked up the victory.

Pettiford, however, also ran into problems pitching at home, according to The Reno Gazette-Journal. At one point in early July, he'd thrown three-straight poor performances in Reno.

"I make good pitches and I still give up the cheapest hits," Pettiford told The Gazette-Journal. "Guys bloop it over the infield, or they get the ball in the wind or it gets in the gap. To tell you the truth, I'll be glad to go on the road." 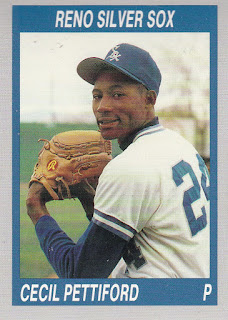