Originally published May 8, 2011
The Blue Jays' top five picks in 1986 netted them Pat Hentgen, who went on to a long career in the majors, winning a Cy Young award.

Hentgen was taken by the Blue Jays in the fifth round. Two rounds earlier, in the third, the Blue Jays selected Andy Dziadkowiec, a high school catcher out of Chicago.

Dziadkowiec, too, went on to a relatively long career, seven seasons as a pro, but he also never made the majors.

Dziadkowiec was taken by the Blue Jays that year out of Quigley South High School. Dziadkowiec quickly signed.

With Quigley South that April, Dziadkowiec got two hits in one game, including a home run.

He started his professional career at rookie league Medicine Hat, playing 48 games and hitting just .208. In one August game, he was also thrown out at home.

At Dunedin, Dziadkowiec hit .274 with six home runs. For 1990, Dziadkowiec played only 38 games, 37 of those at AA Knoxville and a single game at AAA Syracuse. He went 0 for 3 with the Chiefs.

He only played three more seasons, never getting into more than 67 games in any one of the campaigns.

He played 48 games an independent high-A Miami squad in 1991. Two Dziadkowiec hits, one a double, helped seal a late-April Miami win. He scored the winning run in one July contest. In late August, Dziadkowiec hit a three-run home run.

By 1992, Dziadkowiec was in the Mets system, playing 25 games at AA Binghamton and 11 games at AAA Tidewater. The Tidewater games upped his AAA total games played to 12, where it would remain.

With Binghamton that August, Dziadkowiec hit a two-run single in a win against Reading. He also tripled and scored in a game against Albany-Colonie.

His final season came in 1993, 67 games at Binghamton. Dziadkowiec hit .210 with a single home run. That only home run came in early June at Reading, according to The Allentown Morning Call, a homer "which soared an estimated 400 feet over the 25-foot upper line of billboards in dead right field."

It was the last of 10 home runs Dziadkowiec hit over his seven-season professional career. 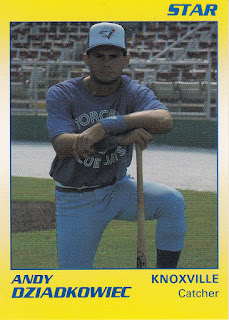