Tim Donahue had a good night in this July 1990 game as he picked up three hits, but his Reno Silver Sox still lost, The Reno Gazette-Journal wrote.

The defeat marked the club's 10th straight. Donahue, though, knew the club couldn't focus on that, he told The Gazette-Journal afterward.

"We can't go out there and be afraid to lose," Donahue told The Gazette-Journal. "You have to be positive about all this."

Donahue worked to be positive over that season and the next two. Those three campaigns marked the extent of his pro career. He topped out at high-A.

Donahue's career began that year in 1990, signed by the Indians out of the University of Washington. He went to Washington out of his native Hawaii.

Donahue returned to Kinston in 1992 and saw 66 total games. He hit a two-run single in an August game. He hit .225 overall in what turned out to be his final pro season.

Donahue ultimately settled back in Hawaii. His son Christian Donahue has since followed his father into the pros. Christian signed with the Cubs in 2018 and has briefly made AAA.

In July 2018, the younger Donahue spoke to MiLB about his father's influence.

"He's the one who has taught me everything I know," Christian Donahue told MiLB. "From my hard work or my discipline, I learned everything from him about the game of baseball." 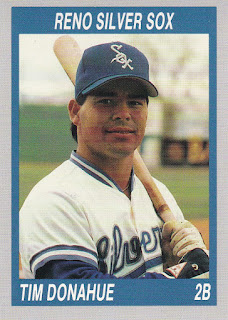