Steve Adkins saw five ML games with the Yankees in 1990, the extent of his big league career

Originally published July 25, 2011
Steve Adkins thought he did well the previous year. He'd picked up 15 wins at AAA Columbus, then picked up another win and a six-inning bid for a no-hitter with the big club in the Bronx.

So, in spring 1991, when he was quickly sent to minor league camp, Adkins believed the Yankees hadn't given him a fair shot. He didn't think they would ever give him a shot.

"The best way to make the rotation here is to be traded, make the rotation somewhere else and come back here as a free agent," Adkins told The South Florida Sun-Sentinel after the demotion. "If you have a bad game and aren't making $2 million a year, you can't pitch in the big leagues."

Adkins did eventually get traded, that June to the Cubs. But Adkins never got back to the Yankees, or made the majors, again.

Adkins' career began in 1986, taken by the Yankees in the 15th round of the draft, out of the University of Pennsylvania. He played that first year at short-season Oneonta, going 8-2 in 14 outings.

"If Adkins gets his knuckle curve over, Adkins can pitch anywhere," Albany pitching coach Russ Meyer told The Times.

Adkins debuted Sept. 12. He didn't give up a hit, but he did give up eight walks and he was pulled before the second inning was out. His knuckleball just wasn't working.

Two weeks later, though, Adkins had a more legitimate no-hit bid. He went six innings against the Brewers, before giving up a hit to Greg Vaughn.

"I really wasn't upset because I made a bad pitch and he hit it hard," Adkins told The Associated Press. "It wasn't a little squibber through the infield. There was a little relief."

Adkins' last outing came Oct. 3, against Detroit. This time, he gave up seven hits. He also gave up seven earned runs. One of those hits was Cecil Fielder's 50th home run of the year. Adkins finished with five starts and a 1-2 record. His ERA was 6.38.

While Adkins hoped for his shot to return to the majors in 1991, he didn't get it. He started at AAA Columbus, then moved to AAA Iowa after his mid-season trade. He stayed at Iowa through 1992, posting a 6.13 ERA that year with a 7-13 record.

He moved to the White Sox and Blue Jays systems in 1993, then the Orioles system in 1994. But he never got back to the majors. 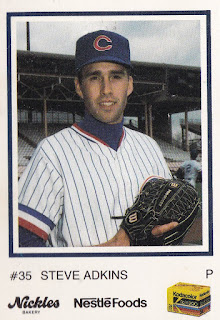