Pedro Martinez - the other one - made the bigs in 1993, was happy to be there; Saw five ML campaigns

The Escondido Times-Advocate felt it had to call him "the other" Pedro Martinez as he made his major league debut in June 1993.

This Pedro Martinez, however, didn't seem like he would care. He was in the majors.

"Maybe it's good if I go one or two innings at first," Martinez told The Times-Advocate. "I'm just happy to be here."

This Martinez made his debut that year after six full seasons spent in the minors. By the time he was done, he'd seen time in five big league campaigns.

Martinez' career began in 1987, signed by the Padres as a free agent out of his native Dominican Republic. Martinez was originally known as Pedro Aquino.

Martinez started with the Padres at short-season Spokane and played his first two seasons there. He went 4-1, with a 3.83 ERA his first year there and 8-3, with a 4.24 ERA his second.

In an August 1988 game, he picked up his final win on a complete game as he struck out nine, The Spokane Chronicle wrote.

"He started working away (keeping the ball outside), and the hitters weren't making adjustments," opposing coach Jeff Mace told The Chronicle afterward. "They were still trying to pull the ball. He's a good pitcher."

Martinez moved to single-A Charleston for 1989 and pitched 39 consecutive innings at one point without giving up an earned run.

He made AA Wichita in 1990. He stayed there three seasons, then made AAA Las Vegas to start 1993. That June, he got the call to San Diego.

He saw 25 relief outings for Houston that year, with a 7.40 ERA. He then moved to the Mets and Reds for 1996 and saw nine total outings. He then got into eight final games for the Reds in 1997 to end his big league career. 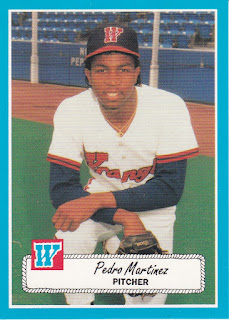