Mark Charbonnet came through in clutch over 12 pro seasons; Made AA, played in independent ball

Mark Charbonnet had a big day for the Harrisburg Senators in this May 1995 game, according to The Carlisle Sentinel.

His day included two hits, one a solo home run, two RBIs, and praise from his manager Pat Kelly, The Sentinel wrote.

"He's very good in the clutch. Last I saw he was hitting .375 with runners in scoring position," Kelly told The Sentinel afterward. "You kind of overlook him in the lineup with the big three ... at the top. I don't know if they relax on him or he's that good. But he's really come up big for us."

Charbonnet came up big for Harrisburg that year in his seventh professional season and his first at AA. He went on to play five more campaigns in independent ball and in Mexico. He never made the majors.

Charbonnet's career began in 1989, taken by the Indians in the sixth round of the draft out of Gahr High School in Cerritos, Ca

Charbonnet saw high-A Kinston in 1993, then moved to the Expos system and high-A West Palm Beach for 1994.

He had a slow start for West Palm Beach in 1994, hitting .214 in the first half, but broke out with a .344 average by early Augist in the second half,  The Palm Beach Post wrote.

"I'm trying to relax and help the team the best way I can," Charbonnet told The Post then. "In past years, I've done well the first half and slowed up the second half. This year I turned it around."

Charbonnet played 2000 at independent Tri-City and then for Torreon and Puebla in Mexico to end his career. 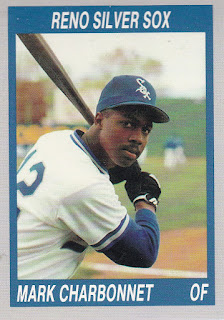