Ken Whitfield wanted the chance to see if he was a major leaguer; Briefly made AAA, not bigs

Ken Whitfield played in his seventh season as a pro in 1990 for the high-A Reno Silver Sox. He'd briefly made AAA two years earlier, after sitting out a year having been released, The Reno Gazette-Journal wrote.
Whitfield remained optimistic in 1990, he told The Gazette-Journal, even though he still had largely spent his career at single-A or below.
"But I haven't given up on myself yet," he told The Gazette-Journal that July. "I'm eager to  advance. I would really be surprised if I'm in A-ball again next year. I just want the chance to see if I'm major league material."
Whitfield wasn't in A-ball the next year as he made AA Canton-Akron. That season at AA, though, proved his last as a pro. He never made the majors.
Whitfield's career began in 1983, taken by the Blue Jays in the eighth round of the draft out of Mindon High School in Louisiana.
Whitfield started with the Blue Jays at rookie Medicine Hat. He hit .169 in 35 games. He then moved to single-A Florence for 1984 and played at single-A Kinston for 1985 and 1986. He hit .223 in 125 games at Kinston in 1986.
After not playing in 1987, Whitfield returned with the Indians at single-A Reno for 1988. He hit .331 in 84 games. After signing that May, he picked up a hit in each of the first 14 games he played in. He then hit two home runs in a July game.
"It was a slider away," Whitfield told The Gazette-Journal of the second shot. "I didn't think I hit the ball that well. But I guess I got pretty good wood on it and drove the ball."
Whitfield's work at Reno then earned him a brief look at AAA Colorado Springs. He hit .284 in 19 games.
He returned to single-A Kinston for 1989, then high-A Reno in 1990. He made AA Canton-Akron in 1991. He saw 69 games there and hit .240 to end his career. 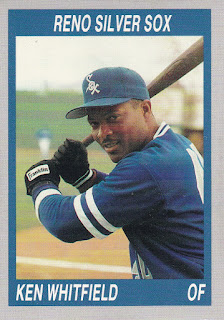