Keith Shepherd played winter ball in Puerto Rico. His play there got him noticed by two stars, Bobby Bonilla and future Hall of Famer Roberto Alomar, The Baltimore Sun wrote.

That then also got him his fourth look at the majors in 1996, with the Orioles, The Sun wrote.

"He throws hard," Alomar told The Sun of Shepherd that March. "He's a competitor. He pitched about every day over there. He likes to take charge on the mound."

Shepherd's fourth look at the bigs amounted to 13 relief appearances. Those ended up being the final appearances of his big league career.

Shepherd's career began in 1986, taken by the Pirates in the 11th round of the draft out of Wabash High School in Indiana.

He started with the Pirates in the rookie Gulf Coast League. He moved to short-season Watertown for 1987 and then single-A Augusta and Salem for 1988. He went 9-6 overall tat year, with a 4.49 ERA.

He moved to the Royals system for 1989, starting at single-A Baseball City. He saw 11 outings there before he moved again, this time to the Indians and single-A Kinston, then high-A Reno and Watertown for 1990.

In 1991, he arrived with the White Sox, playing at high-A Sarasota and single-A South Bend. That May, he spoke with The South Bend Tribune about his career to that point - and his expectations.

"I thought about giving up," Shepherd told The Tribune. "I throw well enough, I can make it to the big leagues."

He did make the majors and he did it the very next year. He started the year with the White Sox at AA Birmingham, then moved to the Phillies and AA Reading in a trade. That September, he got the call up to Philadelphia.

The Rockies selected him in the expansion draft for 1993. He then saw 14 more major league outings there and had a 6.98 ERA. 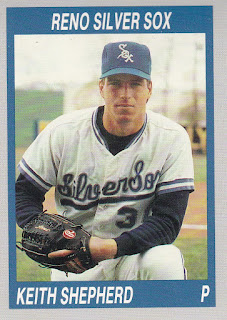