Tad Powers' 1989 season at single-A Peninsula, his second in the pros, didn't ultimately lead to the majors, but he did lead him elsewhere - to Australia, The Reno Gazette-Journal wrote.
"Before I went over there I tried to think of all the things I'd like to get done while there," Powers told The Gazette Journal. "Starting a business was one of the things I wanted to get started. Australian cards seemed like a natural."
Australian baseball cards. Powers ended up not only playing in Australia, but he got involved in cards - selling them on road trips in the states - and helping out Australian baseball in other ways, including as a part owner.
He then turned his efforts there into a career as an entrepreneur and promoter of the game in the years afterward.
Powers' career in baseball began in 1988 signed by the Orioles out of Winthrop University in South Carolina.
He played his first year as an Orioles signee with the co-op Virginia Generals in the single-A Carolina League and with the Orioles at short-season Erie. He went 3-8 on the year, with a 2.40 ERA.
Powers then played 1989 at co-op Peninsula. He went 7-2 there, with a 3.18 ERA. He played that spring with the Orioles, but got released and signed with Peninsula.
He spoke to The Newport News Daily Press that June about pitching with a club that had few save opportunities.
"Sure, I haven't had too many opportunities at saves," Powers told The Daily Press. "The way I look at it is as long as I get a chance to pitch in as many games as possible, I'm happy. As long as you're playing somewhere, you should be happy."
Later that fall, his somewhere was Australia. He played there for the Sydney Metros and pitched in 22 games, largely in relief, saved four and had a 4.79 ERA.
For 1990, he returned stateside with high-A Reno, another co-op team. He went 5-6 on the summer.
By September, he was back in Australia as manager, part owner and player for the Sydney Wave. Among his concerns, finding the club a long-term home, according to The Sydney Morning Herald.
"It's in the middle of a thriving baseball area," he told The Morning Herald about one particular spot called Flat Rock, "and being just off the Harbour Bridge freeway makes it accessible to eastern and southern suburbs people."
He then returned for a brief stint with Salt Lake City for 1991, but his time in Australia continued. In all, including his time there, Powers played for nine years, according to his bio at Sports Renovation and Management, where he is listed in 2020 as vice president for community affairs.
He later became a scout for the Cubs and Angels. He also founded a baseball camp company and a baseball academy company. 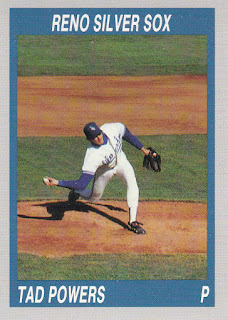