Guillermo Velasquez got his shot at first for the Padres in 1993; Saw two ML seasons

The Padres traded away first baseman Fred McGriff in July 1993 and the club then turned to Guillermo Velasquez, The Associated Press wrote.

Padres manager Jim Riggleman pointed out to The AP what that meant.

"Defensively he's a very good first baseman," Riggleman told The AP. "We're going to give him a shot to be the replacement for Fred McGriff. That says a lot for what we think of him."

Velasquez had seen brief looks with the Padres in 1992 and earlier in 1993. His stint at first base that year amounted to 38 of the 79 major league games he saw. Those games ended up being the last in the bigs he saw.

Velasquez' career began in 1987, signed by the Padres as a free agent out of his native Mexico.

He started with the Padres at single-A Charleston and returned there for 1988. He hit .220 his first year there and .287 his second.

He hit .304 in 15 games down the stretch. After his call up, he spoke with The Los Angeles Times about the daunting task of staying with the Padres with McGriff there.

"I'd like to stay in San Diego," Velasquez told The Times, "but there’s not much room for me with Fred McGriff already here. What am I going to say, that I’m going to beat out Fred McGriff?"

Velasquez then returned to San Diego for those 79 games in 1993. He played intermittently early and the Padres sent him back down briefly in June to get to play more regularly.

"He needs to play every day," Riggleman told The Escondito Times-Advocate then. "And it was starting to show in his performance."

Velasquez hit .210 on the year as he also saw time in the outfield and pinch-hitting.

Velasquez then played 1994 in the Indians and Red Sox systems, at AAA Charlotte and at AA New Britain. His final minors time came in 1995 with the Expos at AAA Ottawa.

Baseball-Reference later credits him as playing back in Mexico, from 2005 to 2007, last playing for Puebla and Minatitlan. 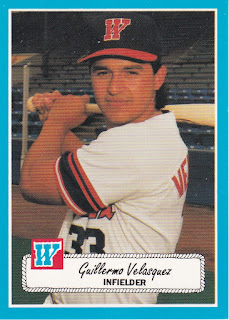