Cookie the Wichita Wranglers mascot could have been played by any staff member; Replaced by horse

Bob Hemond had minor league baseball experience, he explained to The Sacramento Bee in December 1999.

A partner in the group set to bring a AAA team back to the city for 2000, Hemond had worked elsewhere and did many jobs, he told The Bee.

"You learn down here, you better be ready to do anything," Hemond told The Bee of his work in the minors. "When I was with the Wichita Wranglers (from 1988-91) nobody had a title. We had to jump in and take tickets or put on the Cookie (the cowboy) mascot suit."

Cookie served as the Wranglers mascot in the late 1980s and early 1990s. He also got at least two of his own baseball cards in 1989 and in 1990. (It's unclear whether Hemond or some other Wichita staff member donned the suit for either card.)

He also got his own writeup in the 1992 team program, though one that may have stretched his biography a bit, placing him at many of the top highlights in baseball history.

The biography also pointed to an apparent origin of his time in Wichita, 1987, through Wichita GM Steve Shaad. As the writeup told it, the mascot met Shaad at the Metrodome that year - and inadvertently created the Homer Hankie.

"In Minnesota, the 'homer hankie' was born, and in Wichita, Cookie had taken the first step toward becoming the official mascot of the Wichita Wranglers and weaving himself into the tapestry that is baseball in America's Heartland," the program read.

Cookie's time in Wichita, however, appeared then to be near its end. By the next February, it was Wilbur T. Wrangler making public appearances, meeting with area students, and a 1995 Wilbur card placed Wilbur's birth as July 1992. 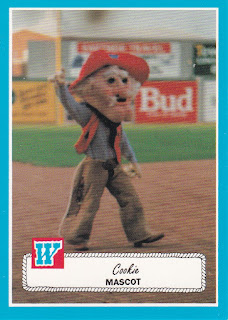