Yankees general manager Lou Piniella talked up the team's haul in this December 1987 trade with the Mariners, including young right-hander Clay Parker, according to The Associated Press.

"We have very strong scouting reports on Parker," Piniella told The AP then. "He has been likened to Mike Boddicker at the same point in his development. He is a good competitor with a bright future."

Parker had seen three major league outings with Seattle earlier that year. He went on to compete in the majors over three more seasons. His future with the Yankees included parts of two of those campaigns. His final big league time came back with the Mariners in 1992.

Parker's career began in 1985, taken by the Mariners in the 15th round of the draft out of Louisiana State University.

He started with Seattle at short-season Bellingham. He went 6-1 over 10 outings, with a 1.55 ERA.

Parker then made single-A Wausau for 1986 and then AA Chattanooga, AAA Calgary and Seattle in 1987.

That June, he "experimented" with sandpaper at Chattanooga and earned a five-game suspension, according to The Calgary Herald. Still, he soon saw AAA Calgary.

"I could tell a little difference, but I was worried more about how it scuffed the ball than how it would get the batter out," Parker explained to The Herald that July.

His debut with the Mariners came that September. He saw three outings, one start and gave up nine earned in 7.2 innings of work.

He saw an emergency start in early September and went 7.1 innings while giving up a single run.

"I was uncomfortable out there in the first inning," Parker told The New York Daily News afterward. "I didn't have my palm ball. Pitching without my palm ball means going without my best weapon. It makes my fastball better."

He then started 1990 back in New York. He saw five outings, two starts, before being traded in early June to the Tigers. He then saw 24 outings, one start with Detroit. He went 2-2, with a 3.18 ERA.

Parker spent 1991 at AAA Tacoma with the Athletics, then returned to Seattle for 1992. He pitched in eight final games for the Mariners, starting six. He ended that year with an 0-2 record, with a 7.56 ERA. 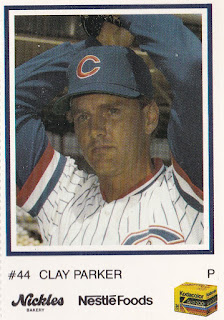