Reno's Chris Cole went up against a top-ranked pitcher in Kiki Jones in this May 1990 contest and Cole came out on top, The Reno Gazette-Journal wrote.
Cole went the distance while giving up six hits and two runs for the 16-2 victory, The Gazette-Journal wrote.
"The important thing for Chris was he had good location in the strike zone and had a good changeup," Reno pitching coach Ben Gallo told The Gazette-Journal. "That was his second good outing in a row."
Cole picked up that outing in his second pro season. The season also marked his last pro season. He topped out at high-A.
Cole's career began in 1989, signed by the Indians as an undrafted free agent out of Elon University in North Carolina. Cole was also credited by his given first name, Howard Cole.
At Elon, Cole set records for 11 wins in one season and 31 over his career. He made the school's Hall of Fame in 2001 and the Halafax County-South Boston (Va.) Hall of Fame in 2015.
With the Indians, he started at rookie Burlington and got a one-game look at single-A Kinston. He went 3-3, with a 3.09 ERA at Burlington and went seven without giving up a run in his only outing at Kinston,
He then started 1990 at high-A Reno and in the team's starting rotation. His manager Mike Brown gave his early assessment of Cole to The Gazette-Journal.
"He's very competitive and he has a good fastball," Brown told The Gazette-Journal of Cole.
Cole went 5-5 for Reno over 14 outings, 12 starts at Reno, with a 3.72 ERA. He then moved back to Kinston and went 1-5, with a 5.00 ERA. An arm injury then helped end his career at two seasons. 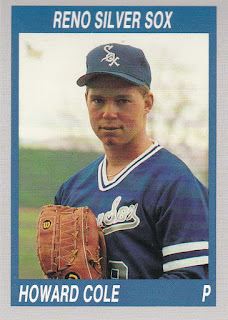