Brian Wood returned to Reno's Moana Stadium in June 1988 as a member of the opposing Riverside Red Wave, after playing with the Padres affiliate in Reno the previous year, The Reno Gazette-Journal wrote.

His return turned into a complete game, six hitter in an 11-1 win, The Gazette-Journal wrote.

"All last season, I only had one complete game at Moana," Wood told The Gazette-Journal afterward. "I was more comfortable pitching here today because I was able to spot my fastball and keep my slider on the outside corners."

Wood pitched comfortably enough that year at Riverside to make the jump to AA Wichita. He later made AAA over three seasons, but, in a career that spanned nine campaigns, he never made the majors.

Wood's career began in 1986, taken by the Padres in the second round of the January draft out of Middle Georgia State College. Wood was also credited with his middle initial, Brian S. Wood.

Wood started with the Padres at short-season Spokane. He saw 24 games, all in relief, saved five and ended with a 3.80 ERA.

Late that August, Wood put together a scoreless streak that extended to 20.2 innings, extending it a day after his team was eliminated from the playoff hunt, according to The Spokane Spokesman-Review.

"It was pretty noticeable," Wood told The Spokesman-Review of the letdown after the elimination. "Losing a close game like yesterday makes you lose some intensity, because it put us out of it pretty much. Today definitely did." 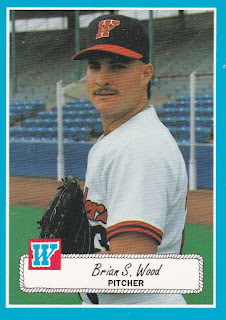