Brian Cisarik had himself a career day for his Texas Longhorns in this April 1987 game, according to The Austin American-Statesman.

In the double-header, Cisarik knocked in six runs. He also hit two home runs and drew praise from his coach, Cliff Gustafson, The American-Statesman wrote.

"He's amazing," Gustafson told The American-Statesman afterward. "A little guy like that popping two out of the yard."

Cisarik went on from Texas to turn pro in 1988. His pro career lasted five seasons. He topped out at AA.

Cisarik's pro career began as the 16th round pick of the Padres in the 1988 draft out of Texas.

At Texas, Cisarik had a school-best .533 career on-base percentage, and a second-best career average of .389. He one all-conference twice and became an All-American. In 2013, he made the school's Hall of Honor. (His induction speech is on YouTube)

Cisarik started with the Padres at single-A Charleston and short-season Spokane. He hit .295 over 67 games. 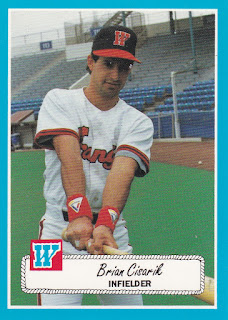