Barry Blackwell got off to a strong start at high-A in 1990; Saw three pro seasons

Barry Blackwell's manager at high-A Reno gave an update on his progress to Blackwell's hometown paper in June 1990 and the update came with praise, according to The Bridgewater Courier-News.

The catcher had gotten off to a hot start, but also ran into injury, a ball to his foot that put him in a soft cast, manager Mike Brown told The Courier-News.

"He does a good job calling games and when he was here, he had six home runs, and was tied for the club lead," Brown told The Courier-News. "I think he's further ahead defensively, but one reason he was sent here is because, at times, he can show you some legitimate power."

Blackwell soon returned to the field and he also soon made that year to AA Canton-Akron. That season, though, proved his last as a pro. He topped out at AA.

Blackwell's pro career began in 1988, taken by the Indians in the 17th round of the draft out of Florida State University. Blackwell was also credited by his middle name Todd Blackwell.

At Florida State, Blackwell made first-team freshman All-American in 1985. He then made the conference all-tournament team in 1987 and 1988. He picked up a home run in one early 1988 conference tournament game.

He started with the Indians in the rookie Gulf Coast League and at single-A Kinston. He hit .242 overall in 49 games.

To start that season in 1990, Reno manager Brown told The Reno Gazette-Journal that Blackwell handled pitchers well and had a strong arm. He hit .278 between Reno and Canton-Akron over 55 games. That season marked his last as a pro.

Years later, in 2004, Blackwell served as an assistant coach in the Cape Code League for Yarmouth-Dennis. 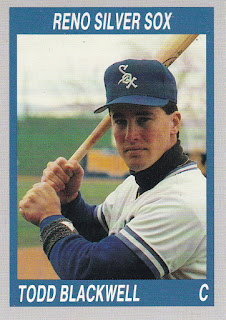