Alex Ferran became a sought-after commodity in 1991, except the attention came after his pro career had concluded, according to The Miami Herald.

The attention came from a local Miami-area amateur softball league, The Herald wrote.

"Everybody's asking about him," Juan Stefano, sponsor of  Ferran's team, told The Herald that December. "They all want him not that they see how good he is. He's pretty special."

Ferran joined Ferran's team after a pro career that lasted three seasons. He made it to high-A.

Ferran's career began in 1988, taken by the Indians in the 33rd round of the draft out of Coral Park High in Miami.

With the Indians, Ferran started in the rookie Gulf  Coast League. He hit .238 in 60 games there. He picked up three hits in a fall Instructional League game alongside the same performance from Albert Belle

He played 1989 between single-A Kinston and short-season Watertown. He went 3 for 4, with two RBI in an April game for Kinston. He hit .201 overall on the year in 103 games between the clubs.

Ferran then started 1990 at high-A Reno. In 46 games, he hit .208. Reno manager Mike Brown told The Reno Gazette-Journal that April that Ferran had a strong arm and could hit for power, but he'd like to see him hit for higher average.

When Ferran didn't hit for average, the club tried to take advantage of his arm and sent him back to the Gulf Coast League to try pitching. He went 0-4 over 12 outings, five starts, with a 11.22 ERA to end his career. Baseball-Reference then records him returning for one final outing at high-A Sarasota in 1995. 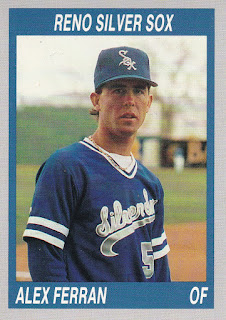