Mike Frame returned from a spike in his pitching hand to play as pro; Saw two seasons 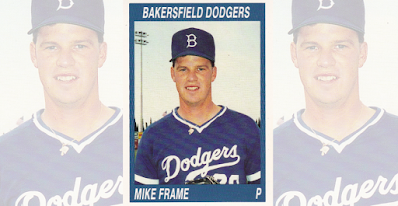 Sacramento State reliever Mike Frame suffered a spike wound in his pitching hand the week earlier, but he appeared on track to pitch again in the regionals, his coaches, head coach John Smith and pitching coach Gordon Blackwell told The Sacramento Bee.

He just had to ensure the stitches didn't bother him, they told The Bee.

"Gordy told me he was throwing gas in the bullpen," Smith told The Bee. "But he was having trouble with the curveball because one of his (three) stitches was poking him."

Frame came back to pitch well enough to sign professionally with the Dodgers weeks later. His pro career lasted two seasons. He made high-A.

Frame's career began in 1989, signed by the Dodgers as an undrafted free agent out of Sacramento State.

At Sacramento State, Frame pitched as a fifth-year senior. He went 6-2 in 1989, with a 2.63 ERA. He threw three scoreless innings in a March game, then threw a four-hitter in an April game.

He started with the Dodgers at rookie Great Falls. He got into 16 games, starting four and ended with a 1.59 ERA. He picked up an August win going 2.1 of scoreless relief.

Frame moved to high-A Bakersfield for 1990. He saw 31 games in relief, started one, went 1-3, with four saves and turned in a 4.50 ERA. That season marked the last of his career. 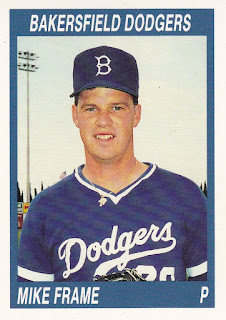