Jon Matlack returned to the field in 2015 as a coach for the collegiate league Glens Falls Dragons and he brought with him decades of experience as both a player and as a coach.

To The Glens Falls Post-Star that June, he explained his expected approach with the team's college players.

"I'm going to be as hands-on as I need to be," Matlack told The Post-Star. "I almost look at this as like planting a garden. … If you water it and fertilize it every day, you're liable to kill it — you've got to let it grow, and we've got to let these guys work."
Matlack's experience included time in 13 major league seasons, including a Rookie of the Year award. It also included years as a coach, much of it spent helping pitchers in the minors.
Matlack's long career in baseball began in 1967, taken by the Mets in the first round of the draft out of Henderson High in Pennsylvania.
He started with the Mets at AA Williamsport. He made AAA Tidewater in 1969, then made the Mets in July 1971.
Matlack went 0-3 over seven outings, six starts, with a 4.14 ERA. He then returned for 1972 and gave a performance good enough to be named the league's top rookie. He went 15-10, with a 2.32 ERA and he struck out 169.
"Consistency is the name of the game," Matlack told UPI after winning the award.
That season also left Matlack connected with Hall of Famer Roberto Clemente, as Matlack gave up Clemente's 3,000th hit.
He then went 14-16 in 1973 and helped his Mets to the World Series. He threw a two-hit shutout against the Reds in Game 2 of the NLCS. He then went 1-2 in the World Series, including taking the loss in Game 7 as he gave up four runs in 2.2 innings.
Matlack garnered the first of his three All-Star nods in 1974 and returned there for 1975 and 1976. In 1975, he shared game MVP honors with Bill Madlock.
Matlack stayed with the Mets through 1977. He then moved to the Rangers system for 1978 and stayed with the club for six seasons.
By the time he was done, Matlack had seen time in 13 seasons and collected double-digit wins in seven of those. He finished with a 125-126 record and a career 3.18 ERA. He also threw 97 complete games.
Matlack soon turned to coaching. In 1988, he served as coach at single-A Riverside, and AA Wichita in 1990. He made AAA Las Vegas in 1991. In 1996, he served as pitching coach for the Tigers in Detroit.
In 1999, he served as a roving minor league pitching instructor for the Tigers. The pitcher who threw so many complete games also spoke with The Florida Times Union about how the use of pitchers had changed over the years - and how he disagreed with that change.
"I'm not convinced it's the best way to go," Matlack told The Times Union. "I think in most instances, it's a way for people to remain protected and it's also an easy way out for guys that you're developing as starters. I want to try and develop somebody who has the desire and the physical ability to complete what he starts." 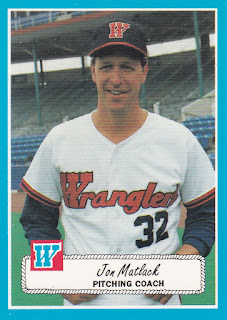