Jason Brosnan made an early bid for no-hitter in rookie ball; His bid for bigs lasted 14 seasons, never made it 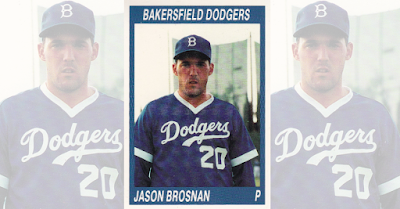 Jason Brosnan took a no-hitter through five innings in this August 1989 contest for rookie Great Falls, but he told The Great Falls Tribune afterward the no-hit bid didn't impact him.

"I was aware of (the no-hitter), although I wasn't really thinking about it," Brosnan told The Tribune. "I knew I couldn't go the whole nine innings so it (the no-hitter) didn't really matter. Of course, you never like to give up hits."

Brosnan made that no-hit bid in his first season as a pro. He went on to pitch in a total of 14 professional campaigns. He made it to AAA in five those years. He never made the majors.

Brosnan's career began  that year in 1989, taken by the Dodgers in the eighth round of the draft out of Cal State Fresno.

He briefly made AA San Antonio briefly in 1991, then played 1992 between high-A Vero Beach, San Antonio and AAA Albuquerque. He started the year at Albuquerque as a reliever and ran into trouble. He gave up eight earned in 8.2 innings.

"We know we're not getting the job done right now," Brosnan told The Albuquerque Journal of himself and the team's other relievers. "We're not throwing enough strikes, we're getting behind a lot of batters and we're walking a lot, too."

Brosnan didn't return to AAA until two years later, in 1994, when he saw 24 outings there. He saw another 23 outings at Albuquerque in 1995, but he didn't see Los Angeles.

He moved to the Mariners system for 1996, seeing both AA and AAA. He then played at AAA with Anaheim, then 1998 back at AA with the Mariners.

He played his final three seasons, 2000 to 2002 with independent Solano of the Western League.

In 2015, he was serving as head baseball coach at California High in San Ramon. 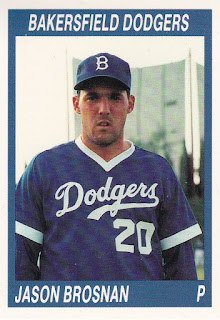