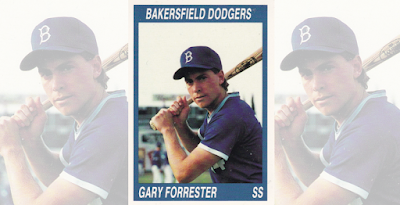 His Salem Dodgers up 2-0, Gary Forrester helped put this June 1989 game away in the seventh as he doubled to empty the loaded bases, The Salem Statesman Journal wrote.
The double also marked something else for Forrester, fresh off the draft: Professional hit No. 1, The Statesman Journal wrote.
"I was just trying to make contact," Forrester explained to The Statesman Journal afterward. "It was my first hit as a Dodger, so it was pretty exciting."
Forrester played that first year at rookie Salem. He went on to see time the next year at high-A Bakersfield. In all, he saw time in three pro seasons. He never saw AA.
Forrester's career began that year in 1989, taken by the Dodgers in the 20th round of the draft out of UNLV.
He started with the Dodgers at Salem. He mostly played shortstop and ultimately hit .167 over 27 games. But he also got to see one game on the mound. In early July, he went 1.2 innings. He gave up two earned, including a home run, but also struck out two, The Statesman Journal wrote.
"It was fun," Forrester told The Statesman Journal of his outing. "I had asked if the situation ever presented itself if I could help out. But I shouldn't have thrown the curve to that one guy."
Forrester then moved to Bakersfield for 1990. He got into 48 games and hit .153. He also saw two outings on the mound and gave up four earned in two innings.
He saw his last pro time in 1991, with the Angels at single-A Quad City. He went 3 for 20 over 10 games to end his career.