Chris Morrow made it back from a sprained shoulder to play eight pro seasons; Made AAA 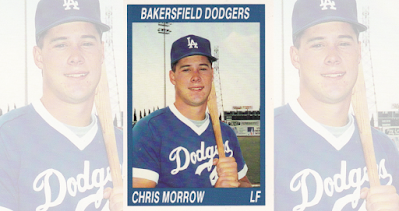 Chris Morrow's second pro season appeared to be over early in 1989 when a dive for a fly ball in July sprained his shoulder, The Salem Statesman Journal wrote.

But, after rehab at home, Morrow returned in time for the playoff push and picked up the key hit in a Salem win, The Statesman Journal wrote.

"It felt a little awkward and a little stiff," Morrow told The Statesman Journal afterward. "But it's good to be back."

Morrow went on to return for six more seasons. He briefly made AAA, but he never made the majors.

Morrow's career began in 1988, taken by the Dodgers in the 13th round of the draft out of Skyline College in California.

Morrow started with the Dodgers at rookie Great Falls. He got into 60 games there and hit .288. He then moved to single-A Bakersfield and short-season Salem for 1989. He knocked a two-run home run and got a second hit in a late-June game.

"He's hot right now," Vero Beach manager Jerry Royster told The Palm Beach Post after a 3 for 4 Morrow outing. "He struggled last year but he made some adjustments and everything seemed to happen for him. It's a treat to see him do that."

Morrow signed with the Giants during the strike and would have been an opening day replacement starter. Instead, the strike ended, he spent the year at AA Shreveport. He hit .246 over 83 games there to end his career. 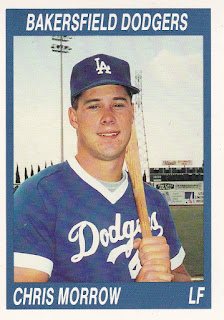