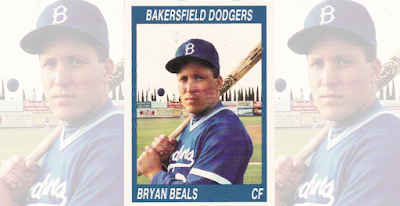 Sonora High scored a run in the third inning of this May 1984 game and The Los Angeles Times credited the speed of Bryan Beals.

He reached on a dropped third strike, stole a base and then scored. He stole four total bases in the game, The Times wrote.

"He's a creator," Sonora coach Gordon Blakeley told The Times then of Beals. "He creates runs."

Beals went on to create enough runs to play in college and turn pro. His pro career consisted of three seasons. He made high-A.

Beals' pro career began in 1988, taken by the Dodgers in the 32nd round of the draft out of Chapman University in California. He also played at Arizona State.

Beals started with the Dodgers at rookie Great Falls. He hit .256 in 31 games. He picked up four hits in one late-August game.

He moved to single-A Bakersfield for 1989. He hit .223 in 39 games there. He lost time after a Bill Bene batting practice pitch broke a bone in his hand, The Times wrote.

Beals returned to Bakersfield, then high-A, for 1990. His season proved brief. He saw time in 13 games and hit .125 to end his career. 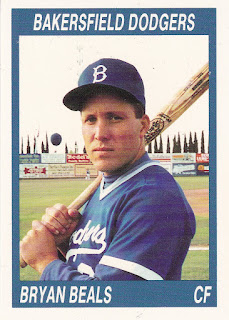