A.J. Sager started in football, then turned to baseball; Made bigs over five seasons

A.J. Sager went to the University of Toledo to play football, not baseball. And he played football until his eligibility ran out, The Newark Advocate wrote.

Then he tried baseball "for the fun of it, I guess," he told The Advocate in August 1988, two months after he found himself drafted by the San Diego Padres.

"I enjoyed football and had a lot of fun up there with it, and got my education paid for," Sager told The Advocate. "And, I still got an opportunity to play baseball. I guess, if I wouldn't have played baseball or wouldn't have been drafted, I might have said 'What if (I would have tried baseball first)?'"

Not only did Sager's late start in college still get him a chance at the pros, he also still got his chance at the majors. After playing his first pro game in 1988 at age 23, Sager went on to make the majors in 1994 at age 29 - and he eventually saw big league time over five campaigns.

Sager's career began that year in 1988, taken by the Padres in the 10th round of the draft out of the University of Toledo.

In April 1994, he debuted with San Diego. He had a slow start, including one outing where he allowed two home runs and a double over seven batters faced. Sager chose to look forward, according to The North County Times.

"I know I can pitch effectively at this level," Sager told The Times then. "Last night didn't go well, but I'm not going to get defensive about it and start pitching afraid."

By 2002, Sager had started his post-playing career as a coach with the Tigers at single-A West Michigan. He coached at AA Erie in 2007, then AAA Toledo in 2008. Most recently, Sager served 2020 as the Tigers pitching coordinator.

In August 2020, Sager spoke to The Toledo Blade about the young Tigers pitchers making their way up to the majors.

"They are all progressing," Sager told The Blade. "They are the guys everyone is talking about. They will just continue to move along. I'm glad all of them are wearing Tigers' uniforms, I know that. I think they all have a chance to help us at the big-league club and have success up there. It's very exciting." 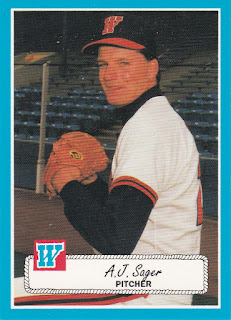