Tony Helmick worked to outsmart hitters; Did so in the pros over three seasons, made high-A

Tony Helmick tried to explain his pitching style to The Staunton News Leader in July 1987.

A member of the collegiate summer league Waynesboro Generals in Virginia, Helmick used his approach to become one of the top pitchers in the league, The News Leader wrote.

"I try to outsmart the hitter," Helmick told The News Leader then. "I try to be crafty on the mound. If I can get the hitter looking for the curve, then I can sneak my fastball past them."

Helmick ultimately outsmarted enough hitters to play in college and in the pros. His pro career lasted three seasons. He made high-A.

Helmick's pro career began in 1989, signed by the Dodgers as an undrafted free agent out of Virginia Commonwealth University. He played his high school ball at Waynesboro High in Virginia.

Helmick started with the Dodgers at rookie Great Falls. He went 4-3 there, with a 2.05 ERA over 13 outings, 10 starts. His third win came in early August, but his pitching coach Goose Gregson believed he should have had more, according to The Great Falls Tribune.

"Tony has been our hard-luck pitcher," Gregson told The Tribune. "He's been the one pitcher we haven't scored runs fore. So it was nice to see him get the win."

He moved to high-A Bakersfield for 1990. He went 6-6 there, with a 3.73 ERA over 34 outings, nine starts. He then returned to Bakersfield for 1991. He went 2-0  there over five relief outings and didn't give up an earned run, but his season and career ended there.

In 2011, Helmick made Waynesboro High School's Hall of Fame. 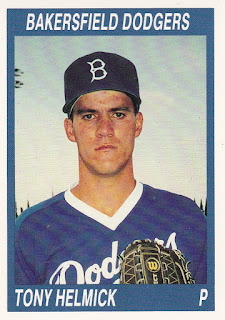