Tom Goodwin's speed in college made him a first-rounder, big leaguer over 14 seasons 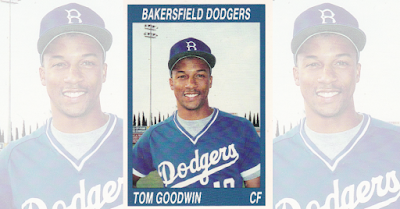 Dodgers scouting director Ben Wade had high praise for Fresno State speedster Tom Goodwin after the Dodgers selected him 22nd overall in 1989, according to The Los Angeles Times. The club thought Goodwin to be the best college player in the country to have played regularly that year. He also compared Goodwin favorably to longtime major leaguer and Dodger Willie Davis, The Times wrote.

"All he has to do is put the ball on the ground and it's a base hit," Wade told The Times of Goodwin. "I mean, he can flat out fly. He's a Willie Davis type, and we haven't had a player like that since Willie left."

The comparison to Davis proved nearly accurate as Goodwin not only went on to the majors but stayed for much of 14 seasons to Davis' 18. Goodwin also ultimately stole 369 bases in the bigs to Davis' 398.

But, while Davis played much of his career for Los Angeles, Goodwin didn't come into his own until he moved on from the club, with the Royals.

Goodwin's career began that year in 1989, taken by the Dodgers in the first round of the draft. He played his high school ball at Fresno's Central High.

At Fresno State, Goodwin played well enough to make the 1988 Olympic team, and helped the U.S. to the gold medal.

Goodwin started with the Dodgers at rookie Great Falls. He moved to single-A Bakersfield and AA San Antonio in 1990, then AAA Albuquerque in 1991.

He then debuted in Los Angeles in September 1991. He got into 16 games that month and went 1 for 7. He returned for 57 games in 1992 and the center fielder made what The Times called "one of the most spectacular catches of the season" on a line-drive to the gap.

"I didn't see the ball until right before it hit the glove," Goodwin told The Times afterward. "I knew where it was going, but I didn't know where it was, so I just ran. At the last minute, I picked it up."

Goodwin played in 30 games for the Dodgers in 1993 before being placed on waivers that offseason. Picked up by the Royals, he played two games in Kansas City in 1994, then he became a regular over the next three seasons.

After playing for the Rangers and the Rockies, he returned to the Dodgers mid-2000 and stayed there through the end of 2001. He then finished out his career with the Giants in 2002, where he made the World Series, and the Cubs in 2003 and 2004.

By 2008, he was a coach in the minors, serving at short-season Lowell. In 2013, he returned to the majors with the Mets as first base coach. He moved to the Red Sox in the same role in 2018 as the club won the title.

In 2014, he lost his 20-year-old son to suicide. In September 2018, as the Red Sox clinched the division, Goodwin spoke to The Boston Globe about his son, all the people who helped Goodwin and his family afterward.

"I just wish I could have been there for him," Goodwin told The Globe. "Not a day goes by when I don’t think about it. It’s never going to go away. I can’t understand it or make sense of it, but I just hope I can help and be there for people who are going through it." 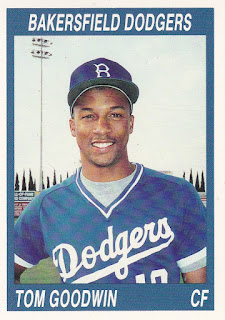