Tom Beyers, the manager at short-season Salem, assessed his young late-round catcher in 1989, according to The Salem Statesman-Journal.

The catcher - Mike Piazza - had gotten in off-season work in the Dominican Republic and had had some recent success at the plate, according to The Statesman-Journal.

"He's always had the power," Beyers told The Statesman-Journal, "now he's getting the chance to show that he can string some home runs together. He's got major league power."

Beyers watched over the future Hall of Famer as part of a minor league coaching career that spanned three decades. He coached and managed from rookie ball to AAA, all after a playing career of his own that spanned five seasons and also made AAA.

Beyers' long career in baseball began in 1979, taken by the Dodgers in the 15th round of the draft out of Cal Poly.

Beyers started with the Dodgers at single-A Clinton. He hit .303 in 74 games. He then made AA San Antonio for 1980 and stayed there for the next four seasons. In the fourth, his final season as a player, he also played at AAA Albuquerque, a single game.

He then went right into coaching. For 1984, he signed on as a coach with the Dodgers in the rookie Gulf Coast League. He took his first managerial job at Salem in 1988, then moved to high-A Bakersfield as manager in 1990.

He served as hitting coach at Albuquerque in 1993, at AA San Antonio in 1994,  then five seasons as the Dodgers' minor league hitting coordinator.

Beyers moved to the Cubs system for 2000, as hitting coach at short-season Eugene, then moved with the club to Boise. He coached or managed at Boise over seven total seasons. He's last credited as coaching in 2014, at single-A Kane County.

In 2010, he spoke with The Chicago Tribune about Starlin Castro, whom he coached at AA Tennessee.

"With Starlin, what I've seen over the years is he has a burning desire to compete,'' Beyers told The Tribune. "He really focuses on the game. He uses his eyes"

That January, he spoke to The Santa Maria Times as he coached local kids in the off-season. He talked about being in the game so long and working in the minors.

"It"s no different than being a teacher," Beyers told The Times. "The ultimate thing is to watch guys move up, have success and get to the major leagues." 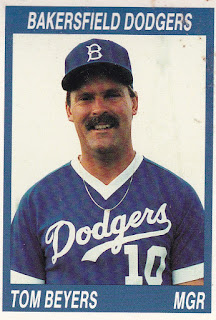