Tim Barker looked back on his second pro season in January 1991 and felt optimistic about his future, his hometown Salisbury Daily Times wrote.

He'd played the previous season at high-A Bakersfield. For 1991, he appeared to be en route to AA, The Daily Times wrote.

"It's a good start, but I still have to make the team in spring training," Barker told The Daily Times then. "But at least they think I can make the club. It's a good step."

Barker did make the AA squad that year, and he made AAA two seasons later. But, in a career that spanned 10 seasons, he never made a major league club.

Barker's career began in 1989, taken by the Dodgers in the sixth round of the draft out of Virginia Commonwealth University.

Barker started with the Dodgers at rookie Great Falls. The infielder hit .313 in 59 games. He then moved to high-A Bakersfield in 1990. That August, he spoke to The Reno Gazette-Journal about rallying with two outs, after a Bakersfield win.

"No one ever gives up in that situation, but we see it as a chance to get the other team down mentally," Barker told The Gazette-Journal.

That December, the Dodgers sent Barker to the Expos for major leaguer Tim Wallach. He told The Daily Times he couldn't believe he'd been traded for a big leaguer, something he believed showed how much the Expos saw in him.

"I didn't expect it, but I'll take it," Barker told The Daily Times. "This will be a new start for me."

But that net season marked his only campaign in the Expos system. Barker played that year between AA Harrisburg and AAA Ottawa. He hit .308 in 49 games at Harrisburg and .228 in 51 games at Ottawa. 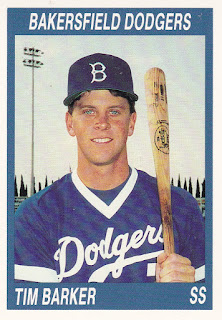