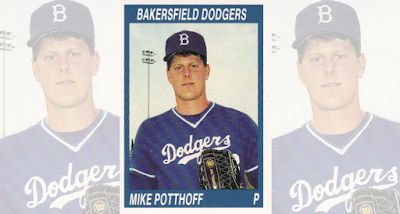 Mike Potthoff worked to make it back from elbow problems in 1990, his second season as a pro, and he updated his hometown St. Charles Post on his progress.

Dr. Frank Jobe had performed the arthroscopic surgery six weeks earlier and Potthoff seemed nearly back to playing shape, he told The Post.

"I've been playing catch for about two weeks," Potthoff told The Post that July. "Hopefully, I'll be back pitching in a game in about three weeks, but maybe that's pushing it a little."

As it turned out, it did appear to push it a little. Potthoff, with 15 innings of work earlier in the year, didn't make it back to the mound that year and only saw four more outings the next year, to mark the extent of his career.

Potthoff's career began in 1989, taken by the Dodgers in the 19th round of the draft out of the University of Missouri.

He played as a high school senior at St. Charles' Howell High. In 1984, his coach there called Potthoff a hard worker as Potthoff prepared to head to Missouri, according to The Post.

"There is an awful lot of talent there," coach Gerry Boehm told The Post. "He's got the ability to be a real good one."

At Missouri, Potthoff played both basketball and baseball, but ultimately settled on baseball and played well enough to get drafted by the Dodgers. After being selected, Potthoff expressed excitement to The St. Louis Post-Dispatch.

"I'm not only excited about getting drafted, but I'm happy to be going to the Dodgers," Potthoff told The Post-Dispatch. "From what I understand, they're one of the best organizations in baseball."

Potthoff started with the Dodgers at rookie Great Falls. He saw 14 appearances, starting two. He went 2-2, with two saves and a 2.86 ERA.

He moved to high-A Bakersfield for 1990. He then saw those seven outings. He picked up a save and gave up five earned in 15 innings. Then he got hurt.

Potthoff returned for four more outings in 1991, two of them starts. Those outings proved the last of his career.

Years later, Potthoff settled in Florida, became a sales director for Anheuser-Busch and took up golf. In 2009, he even won an amateur title by a stroke over Vinny Testaverde, The Tampa Bay Times wrote. 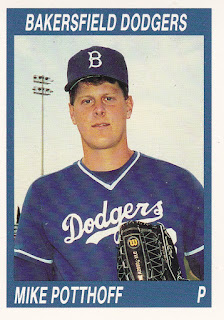