Kiki Jones started with high hopes as first-rounder, then injuries hit; Made AA 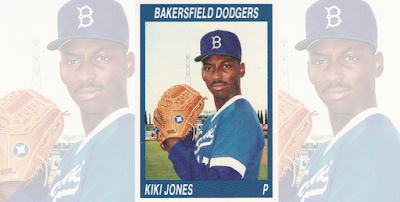 Dodgers first rounder Kiki Jones saw his trajectory in May 1990 and he performed on the field, but he also looked toward his family and his faith to keep himself grounded, according to The St. Louis Post-Dispatch.

"All I'm doing is praying right now, and whatever happens with my baseball future, I pray God will help me take it like a man," Jones told The Post-Dispatch.

At that point, Jones and just about everyone else saw the major leagues in Jones' future. The majors, however, never came. Injuries ultimately derailed his baseball future. He ultimately made AA, but did not make it higher.

Jones' career began in 1989, taken by the Dodgers 15th overall out of Hillsborough High in Tampa.

Midway through his senior year at Hillsborough, Baseball America named Jones the country's top high school prospect and the Dodgers were among those watching.

"I saw him pitch twice in Florida and five of our scouts saw him, and we felt he can run the (speed) gun up as high as anybody and that he might have the best curve (among the top high school pitchers)," Dodger scouting director Ben Wade told The Los Angeles Times.

Jones then got off to a fast start with the Dodgers. Assigned to rookie Great Falls, Jones went 8-0 over 12 starts, with a 1.58 ERA.

He started 1990 off at high-A Bakersfield. But his season. He started 3-3, with a 3.48 ERA over nine outings, eight starts. But tendinitis cut his season short.

Jones returned briefly in April 1991, then again that June. After the June outing, he felt fine, he told The Tampa Bay Times.

"It feels great just to be on the mound again," Jones told the paper. "I feel great, my shoulder doesn't hurt. I can't tell you how excited I am. I was so scared that the arm would start hurting."

For Jones, though, the respite was brief. His 1991 season consisted of 10 total starts, his 1992 season just five.

He returned in 1993 for 18 total starts, including three at AA San Antonio. He gave up seven earned in 14 innings there. That season proved his last in the Dodgers system.

After spending spring 1994 with the Mariners, Jones didn't hit the field again until 1998, as he attempted a comeback with the Devil Rays. That return lasted six outings at high-A St. Petersburg.

He then saw independent Bridgeport in 1999 and another brief return in 2001 with the Rangers at high-A Port Charlotte to end his career. 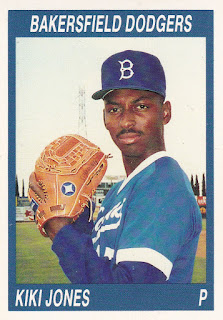