Jamie McAndrew got picked in first round; Later made bigs, but under less-than-expected circumstances 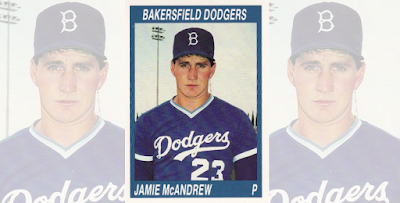 Jamie McAndrew seemed to have a shot at the Dodgers in spring 1992, but he knew not to look ahead, he told Florida Today then.

Going into his fourth pro season, he'd spent the entire previous campaign at AAA Albuquerque, without having seen Los Angeles.

"I'm not going to get impatient," McAndrew told the paper. "If I keep putting up the numbers, there is no way they can keep me down."

McAndrew eventually did make the majors, but not until 1995. He also made it under circumstances that were less than he likely originally hoped, as a former replacement player.

McAndrew's career began in 1989, taken by the Dodgers in the first round, 28th overall, out of the University of Florida.

That August, he spoke with The New York Daily News about his early success and about his father.

"Yeah, I talk to dad a lot," McAndrew told The Daily News. "It helps to have someone to talk to when things are going good ... and when they're not going so good."

Shoulder surgery then kept him out of all of 1994, but he returned in spring 1995 as a replacement player. The strike over, he got his first call to the bigs that July.

Like other former replacements, McAndrew had a difficult time upon arrival. But, in his third game, he hit a White Sox batter in the midst of a feud between the teams and got ejected.

The Associated Press wrote afterward it appeared McAndrew had been accepted as he emerged from the clubhouse, clothing ripped with "Brew Crew" written on his shirt.

"Welcome to the big leagues," McAndrew told The AP, referencing the hazing.

In August, he went eight innings while giving up six hits in a game, after throwing a similar outing days earlier for his first win. Talk was, though, that he might get moved to relief, The AP wrote, but McAndrew wasn't phased.

"Whichever happens, I'm going to be happy," McAndrew told The AP. "I'm happy just pitching here, period. It's not going to make a difference to me at all."

He then saw three final outings in Taiwan in 1998 to end his career.