Brett Magnusson got invited to try out for Olympics; Played in seven pro seasons, coached

After a surprise invite to the Olympic tryouts in 1988, Santa Rosa Junior College's Brett Magnusson didn't get to stay long. He was among the first round of cuts, The Santa Rosa Press Democrat wrote.

But he did get to be among just six junior college players to get the invite and Magnusson knew that meant something, The Press Democrat wrote.

"I couldn't complain," Magnusson told The Press Democrat. "I got to play as much as anyone. I hit the ball really well, so I have no regrets."

Magnusson went on from the Olympic tryouts almost immediately to play at a whole different level, in the pros. His pro career lasted seven seasons and he briefly made AAA. He has since gone on to teach the game to others as an instructor.

Magnusson's pro career began that year in 1988, taken by the Dodgers in the 39th round of the previous year's draft out of Santa Rosa. He played his high school ball at Sonoma High in Sonoma.

At Sonoma, Magnusson's coach Bob McAllister described Magnusson to The Press Democrat in May 1985 as one of the area's top prospects.

"For his size, he is very quick," McAllister told The Press Democrat. "He has an exceptionally quick bat. He's one of the few people who's going to get the opportunity to play after high school."

After heading to Santa Rosa and trying out for the Olympics, Magnusson landed with the Dodgers at rookie Great Falls. He hit .320 in 51 games there, with seven home runs.

"We finally got our heads up and started hitting in the ninth," Magnusson told The Reno Gazette-Journal after that win. "We all felt like we needed to win this game."

Magnusson is then recorded as playing over the next three seasons, but only briefly, as injuries ended his regular playing career. The rest of the time he served as a coach.

He went on to scout for the Dodgers. In 2020, Magnusson is listed as a coach with the Bowie Baseball Academy in Texas. 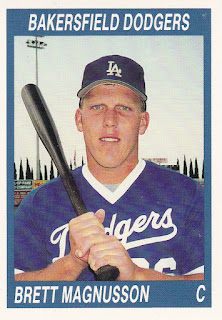