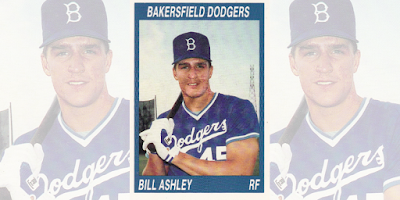 After seeing brief time in the previous three seasons with little chance to become a regular, Billy Ashley looked poised for a breakthrough season in 1995, The Los Angeles Times wrote that April.

He put himself in that position by continuing to hit in the minors as he waited for his call, Dodgers executive vice president Fred Claire told The Times.

"Certainly, he left no doubt in our minds," Claire told The Times of Ashley. "What more is there for him to prove? For a guy who has the potential to hit the way he does, they haven't invented a league he can't play in."

Ashley went on that year to see the most time he would ever see in the bigs, 81 games. He then saw 71 in each of the next two campaigns. Overall, he saw time in seven seasons and hit .233 over that big league career.

Ashley's career began in 1988, taken by the Dodgers in the third round of the draft out of Belleville High School in Michigan. He was also credited as Bill Ashley.

Ashley started with the Dodgers in the rookie Gulf Coast League. He made high-A Bakersfield in 1990, then high-A Vero Beach in 1991.

He played 1992 at AA San Antonio and AAA Albuquerque. Then, that September, he made Los Angeles. He made a couple of errors early, including a ball that hit off his mouth and allowed the winning run to score, The Times wrote.

"The ball got to me before I got to it," Ashley told The Times. "I guess I'm trying to get everything done in my first week."

"I just have to relax. I'm here and I plan to stay here. I'm not going to battle myself anymore," Ashley told The Times in February 1996.

He then continued playing in the minors and independent ball through 2001.

Ashley soon settled in California. In 2013, he took took over as head baseball coach at Westlake High School in Thousand Oaks. 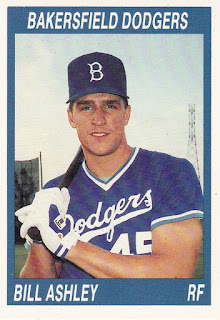