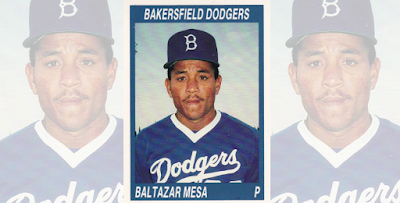 Baltazar Mesa joked with reporters in 2019 that his time in minor league baseball earned him something like $100 billion, according to a Google translation of a Listin Dairio article.

But at another point, his responses turned more serious, the translation read, as this was a Dominican courtroom and Mesa faced extradition to the United States on drug trafficking organization, accused of being one of its top men.

Mesa ultimately was returned to the United States and the case ultimately sent him to prison.

Mesa's original trip to the United States came under much different circumstances, signed by the Dodgers as an amateur free agent out of his native Dominican Republic. The Dodgers signed him years after his brother, Jose Mesa, who went on to a long career in the majors.

Baltazar Mesa started with the Dodgers in the rookie Gulf Coast League as a pitcher. He went 3-3, with a 3.08 ERA.

He then moved to high-A Bakersfield for a brief stint in 1990. In five outings, two starts, he gave up 13 earned runs. He gave up three hits that resulted in five runs in one May relief outing. That season marked his last in the minors.

Years later, he's credited with a return in Taiwan in 1999, for Wei Chuan. He gave up six earned in 10.1 innings of work.

Mesa then returned to the Dominican and to baseball, starting an academy. But federal prosecutors also said he got into drugs and became a top member of an organization allegedly headed by a man named Cesar Peralta. Major league players Luis Castillo and Octavio Dotel were also accused.

The Dominican Republic attorney general called the operation the largest in his office's history as it funneled drugs from South America to the United States through the Dominican.

Back in the United States, Mesa then went to prison. He is listed in September 2020 as an inmate in Miami with an anticipated release date of July 2026. 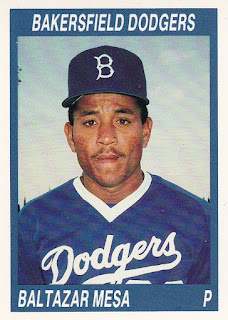