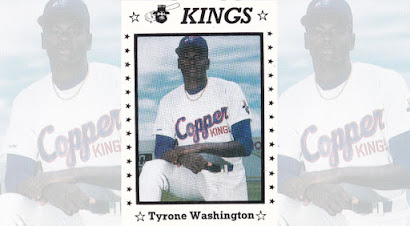 The latest example of that, was his seven-inning scoreless outing that night to move his personal scoreless streak to 26 frames, The Observer wrote.

"I think my fastball has been getting a lot better," Washington told The Observer of his success. "The pitching coach (Jackson Todd) has been working a lot with me. I'm just starting to get into my groove now."

Washington's success at Gastonia that year turned into a promotion to high-A. He would continue pitching in two more seasons. He never made AA.

Washington's career began in 1989, taken by the Rangers out of Southern University and A&M College in Louisiana.

Washington started with the Rangers in the rookie Gulf Coast League. He saw six games, three starts. He gave up 10 earned in 10.1 innings.

He moved to rookie Butte for 1990. He went 7-2 on the year, with a 4.82 ERA over 13 starts. He went five innings of no-hit ball in on early season game, but got pulled, The Montana Standard wrote.

"I really would have liked to have stayed in," Washington told The Standard, "especially with a no-hitter going." 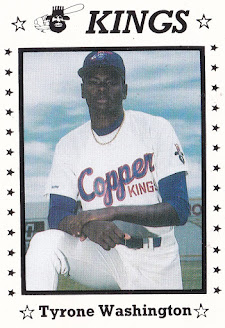