Todd Guggiana played four pro seasons, then used his experience in a new career, as a scout 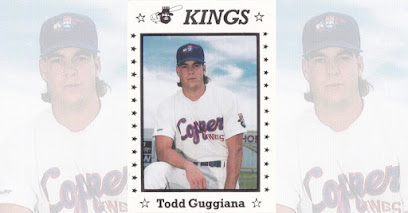 Todd Guggiana knocked in the winning run in this August 1990 game for his Butte Copper Kings and the key, he told The Deseret News afterward, came as the team jumped on the starter early.
Based on previous experience, Guggiana told The News, they needed the runs.
"We knew we had to score as quick as we can," Guggiana told The News afterward. "In the past, they've blown us out,"
Guggiana went on to have a top season for Butte that year, but a knee injury would eventually help end his career. Guggiana, however, eventually used his experience in baseball in other ways as he continued on in the game as a scout.
Guggiana's career began in 1990, taken by the Rangers in the 19th round of the draft out of Cal State Long Beach.
Guggiana started with the Rangers at rookie Butte. He hit .351 on the year, with four home runs and 52 RBI. His performance led to league MVP honors. He gave a different performance in the final home game of the year as he played all nine positions in the same game.
Guggiana moved to high-A Port Charlotte for 1991. He got into 36 game, but a knee injury ended his season and nearly ended his career.
He underwent surgery but, by May 1992, it appeared his career was at an end. Instead, he missed the season, but returned to the field for 1993, back at Port Charlotte.
Guggiana saw 134 games with Port Charlotte that year and hit .286. He hit a two-run home run in a July game. He then made AA Tulsa for 1994. He saw 39 games there and hit .198 to end his career.
By October 1995, Guggiana had become an area scout, a job he has continued in during the more than two decades since.
One player Guggiana has scouted is Joey Gallo, who continues with the Rangers in 2020.
"He's surpassed what we'd thought," Guggiana told Bleacher Report in 2014 of Gallo. "He's going to strike out. He's a bigger guy. They're going to have more holes in their swing." 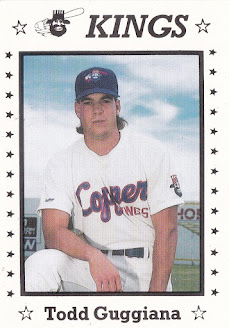