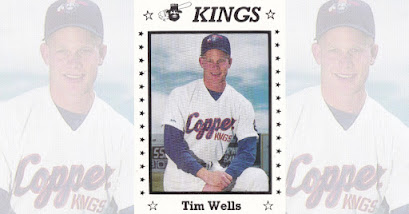 Tim Wells came on in relief in this August 1990 game, a newly minted member of the single-A Gastonia Rangers, The Charlotte Observer wrote.

He proceeded to allow an inherited runner to score, but otherwise held on for the save, The Observer wrote.

"I like coming in when there are runners on base," Wells told The Observer afterward. "It's exciting. That's what I like about closing."

Wells made Gastonia in his first season as a pro. He would return there for his second campaign, but that second-campaign would also be his last. Over his two seasons, he topped out at single-A.

Wells' career began that year in 1990, taken by the Rangers in the ninth round of the draft out of Southwestern Missouri State.

After being taken in the draft by the Rangers, Wells spoke to his hometown Flat River Daily Journal about the selection and moving up in the organization.

"I'm taking them one step at a time, not move up too quickly," Wells told The Daily Journal.

He started with the Rangers at rookie Butte. He got into 16 outings in relief there, with a 3.05 ERA. He saved six. Wells threw four shutout innings for a June save. His sixth save came on four outs in July.

Wells then moved to Gastonia mid-year. He got into 10 games there and had a 5.27 ERA. He saved two. 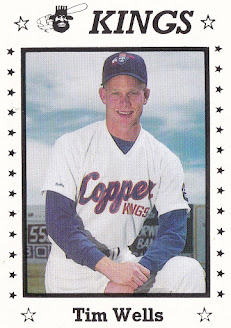