Terry Burrows critiqued himself after AAA outing, then made bigs over four seasons 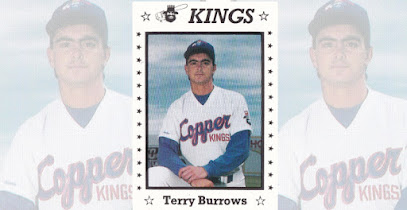 Terry Burrows pitched his AAA Oklahoma City 89ers to a victory this night in April 1993, giving up two hits and one run over six innings, The Daily Oklahoman wrote.

But Burrows told The Oklahoman afterward that he still wasn't completely pleased with his performance.

"Overall, I'm happy about only giving up one run and two hits," Burrows told The Oklahoman, "but as far as throwing strikes I'm not pleased at all. I had four walks in six innings, and that's way too much."

Burrows had to have been pleased with his performance the next year, or at least the Rangers were, as he got his first call-up. Burrows then went on to a career that saw time over four major league seasons and 50 appearances.

Burrows' career began in 1990, taken by the Rangers in the seventh round of the draft out of McNeese State University in Louisiana.

Burrows started with the Rangers at rookie Butte. He went 3-6 there, with a 4.02 ERA over 14 outings, 11 starts. He struggled early, but he then worked with his pitching coach to improve, he told The Billings Gazette that August, after a win over Billings.

"Our pitching coach Lenny Strelitz has been helping me as far as to throw strikes," Burrows told The Gazette then. "And to hold my emotions in a little more ... learn to control yourself instead of trying to overpower everyone."

Burrows then moved to largely relief in 1994. He played most of the year back at Oklahoma City, but saw one game up at Texas. He gave up a home run in one inning of work.

He moved to the Brewers system for 1996 and saw eight relief appearances in Milwaukee. He gave up four earned in 12.2 innings. His final major league time came in 1997 with the Padres, 13 appearances. He gave up 12 earned in 10.1 innings.

Burrows continued playing in the minors through 2001. He also saw 14 outings in Japan, with Orix in 2000. He last played at AAA with the Expos in Ottawa and in Mexico.

In 2007, Burrows' old school, McNeese State, named him head baseball coach. He continued there through 2013. 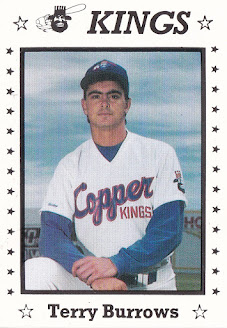