Steve Surico chose college over the pros; Came back from injury, saw all of seven pro games 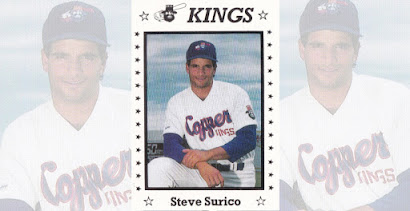 Steve Surico had the opportunity to go pro out of high school in 1986, but he turned it down in favor of college, The Los Angeles Times wrote.

As he prepared to turn pro four years later, as a much lower draft pick, he spoke with The Times about his choice.

"If you look at it as purely a baseball decision, then you could say I made the wrong choice (coming out of high school)," Surico told The Times. "But I had a lot of fun at Loyola and I got my education. So, all things considered, I think I made the right decision."

Surico then started his pro career with the Rangers at rookie Butte. His pro career, though, turned out brief. The pitcher saw just seven outings, all in relief, to mark the extent of his pro time.

Surico's career began and ended in 1990, taken by the Rangers in the 50th round of the draft out of Loyola Marymount University. The Blue Jays had selected him in the 1986 draft in the 20th round, out of Tustin High School in California.

After opting for college, though, Surico ran into back problems that turned out to be small fractures in his spine, The Times wrote.

"His back problems really did set him back to a great degree," Surico's coach at Loyola told The Times in May 1988 as Surico went 11-2 and readied to start a regional contest. "When he came back, he basically was out of shape and overweight from not having done much for a couple of months, and it was a struggle. It's really like he's a year behind."

After coming back from that, Surico pitched well enough to sign with the Rangers and be assigned to rookie Butte.

He went two innings there in one June game, giving up no hits and one unearned run. But he also took a loss in another, giving up two earned in a third of an inning, and then got tagged for five earned in one and two-thirds innings the next night.

Surico did better in a July contest, where he went three innings and gave up one unearned. Surico saw 10.2 innings of work overall and gave up eight total earned runs. The Rangers released him in August. 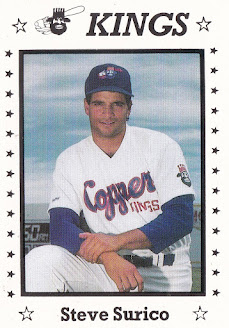