Steve Dreyer didn't expect to be drafted; He then made the majors over two seasons 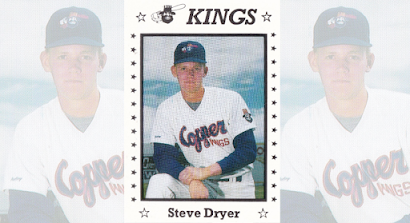 Steve Dreyer got drafted in 1990, but it all came unexpectedly, he told The Des Moines Register in June 1990.

He made conference first-team as he struck out 67 and had a 3.32 ERA, The Register wrote.

"This whole season has been a surprise," Dreyer told The Register after he signed. "My season wasn't bad, but I didn't think it was anything spectacular. Nothing that would catch the eye of scouts."

Dreyer, however, not only caught the eye of scouts, but soon the organization, as he made the majors in his fourth season. He ended with time in two big league campaigns, 15 outings.

Dreyer's career began that year in 1990, taken by the Rangers in the eighth round of the draft out of the University of Northern Iowa. Dreyer's name was also misspelled Steve Dryer.

He then made AA Tulsa and AAA Oklahoma City for 1993. That August, he got his call-up to Texas. He went five innings in his debut and struck out six as he picked up the win.

"After I got that first out (on a strikeout,)" Dreyer told The Fort Worth Star-Telegram, "I thought, 'I can't believe I just did that - my first big league out - you mean the game's not over?'"

Dreyer got into 10 games and started six for the Rangers. He went 3-3, with a 5.71 ERA. Down the stretch, became the last pitcher to relieve for Nolan Ryan and the last to get George Brett out.

He then returned for five more outings with the Rangers in 1994. He gave up 11 earned in 17.1 innings of work.

In 1995, he worked to return from surgery to remove a bone spur in his throwing elbow. He spoke about his comeback attempt to The Tulsa World that July.

"If I never played another game, I wouldn't be angry, feel cheated or feel like I had been denied an opportunity," Dreyer told The World. "I have great memories -- pictures, videotapes and newspaper clippings of things I've done that nobody else ever did, or will do."

Dreyer didn't make it back to the majors. He made Oklahoma City in 1996, then AAA Salt Lake with the Twins in 1997 to end his career. 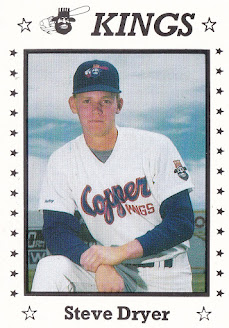