Scott Erickson threw strikes in college; Unlike other player with same name, he saw two pro seasons, made single-A 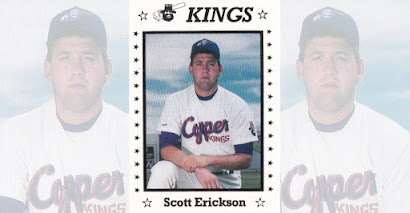 Scott Erickson came out of college at the University of Nebraska-Kearney able to strike batters out.

Erickson's performance in college was enough to get him to the pros, but, unlike the other Scott Erickson, this Scott Erickson saw just two pro seasons. He topped out at single-A.

Erickson's career began in 1990, taken by the Rangers in the 31st round of the draft out of Nebraska-Kearney.

Erickson started with the Rangers at rookie Butte and he did so at least a day late as an overbooked flight from Salt Lake held him and teammates back, The Montana Standard wrote.

He then gave up two runs in an inning and two thirds in an early game. He threw an inning and a third in a July game and gave up a run. Overall, he got into 16 games, one start and gave up 12 earned in 20.1 innings of work. He struck out 24.

Erickson then moved to single-A Gastonia for 1991. He saw 14 relief outings there and gave up 15 earned in 22.1 innings. The Rangers then released him in early June to end his career. 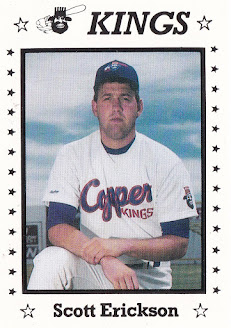