Rusty Greer hustled his way to nine big league seasons, all with the Rangers 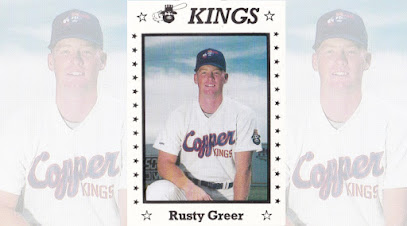 The Rangers' Kenny Rogers needed the big catch to lead off the ninth in this July 1994 contest and his centerfielder Rusty Greer provided it, The Associated Press wrote.
Greer left his feet, caught it and recorded the out. He also preserved Rogers' perfect game, which Rogers would go on to complete, The AP wrote.
"Rusty Greer, gosh, what can you say after a guy makes a catch like that?" Rogers told The AP.
Greer made that catch in his first season in the majors. He went on to take his defense, as well as his hitting, to time in nine big league campaigns.
Greer's career began in 1990, taken by the Rangers in the 10th round of the draft out of the University of Montevallo in Alabama.
Greer started with the Rangers at rookie Butte. He hit .345 in 62 games there. He made AA Tulsa briefly in 1991, then for all of 1992 and most of 1993.
He then debuted in Texas in May 1994. He saw 80 games that first year, hit .314, with 10 home runs. He also came in third in the Rookie of the Year balloting.
Greer returned to the Rangers for 1995 and in each of the following seven seasons. He hit .300 or better from 1996 to 1999, including .332 in 1996.  He also hit 26 home runs in 1997.
By August 1999, his play had garnered him a loyal following from fans in Arlington as he tipped his cap to acknowledge fans before games and after big plays, according to The Fort Worth Star-Telegram.
"We just like the way he plays and the way he hustles," fan Jerry Mahl told The Star-Telegram. "He seems like someone you'd like to meet and introduce your kids to."
By the time his career was over, Greer had seen more than 1,000 major league games, hit 119 big league home runs and knocked in 614. He also had a career batting average of .305.
In April 2005, two seasons after he last played, The New York Times featured Greer and described his style of play as non-stop, noting Greer's career ended short due to injuries.
"Obviously, it's disappointing," Greer told The Times then of the forced end of his career, "but I think the one thing I'm not disappointed in is how I got hurt." 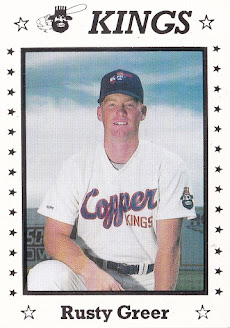